July 15 turned out to be an exciting day because not only was I still feeling dreamy about seeing my work in print in Arc but issue eight of (parenthetical) launched online– a day early! (You can also buy print copies!) One of my short stories appears within its pages! It’s called “Mermaid in the Seine” and it is weird and magical and I think you will like it!

“Mermaid in the Seine” was inspired, in part, by a bottle of wine that I purchased several months ago. As you probably already know, one of my interests as a writer is fairy tales, so I tend to notice anything with a princess or a frog or a witch or a monster on it… It’s no surprise, really, that I decided to buy a bottle of wine because of its pretty mermaid label. 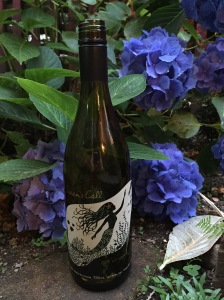 The next thing I did was email my pal Jeffrey Ricker, with a snapshot of the bottle, lamenting that he was too far away to drink it with me. He replied with an offhand remark that perhaps drinking that bottle of wine would turn us into mermaids… And something about that idea stuck. (What’s that saying? Good writers borrow? Great writers steal? Ah, well.)

Anyway, speaking of fairy tales and happy endings–it must have been fate that the story was published when it was, right when Jeffrey was actually back in Vancouver for a good long visit–with enough time for us to open up a bottle of wine together. (Not to mention eat at the majority of Vancouver’s best gourmet ice cream shoppes….)

Go check out (parenthetical) right now! It’s filled with lots of other really lovely writing; there’s already a couple poems in there that are new favourites for me. And besides which, its editors–Nicole Brewer and William Kemp–are some of the nicest folks you’ll have the pleasure of supporting. Their emails to me about my weird magical mermaid story were some of the kindest emails I’ve ever received!

Ruth Daniell is a speech arts teacher, a book editor, and an award-winning writer. Her first full-length collection of poems is The Brightest Thing (Caitlin Press, 2019). She lives in Kelowna, BC, where is at work on her second collection of poems. View more posts